Those are harsh words to throw at a man, especially as he's walking out of your bedroom...

The impact of politics on the film industry is a subject I find fascinating, particularly during and immediately after WWII into the Cold War. The more I learn, the more I want to know, and the more I want to watch films from that era so that I can try to pick apart what was going on behind the scenes in terms of censorship and government regulation. I've talked before about movies that were made at the beginning or during the height of the war, but once the end of the conflict was in sight, Hollywood faced a new set of challenges in the transition to the postwar era. In my Film Noir class, we've been discussing these challenges and how they are exemplified by films such as The Big Sleep.

As the war drew to a close, Hollywood had to appeal not only to the largely female homefront audience, but now to the men returning from overseas as well. Heroes gave way to anti-heroes, including Humphrey Bogart's hardboiled detective Phillip Marlowe. Marlowe is hired by an ailing but wealthy veteran to figure out who is blackmailing his wild young daughter, Carmen. The case is over with rather quickly, as Geiger, the blackmailer, is killed right under Marlowe's nose. But the detective is unsatisfied with this resolution and digs deeper, much to the chagrin of General Sternwood's older daughter, Vivian (Lauren Bacall), who does everything in her power to throw Marlowe off-track as he finds himself investigating not only Geiger's case, but the disappearance of Sternwood's employee Sean Regan, who was alleged to have run off with the wife of Geiger's landlord, Eddie Mars. 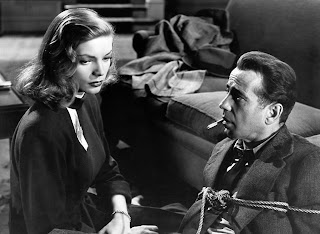 Though Marlowe was hired to extract Carmen from a potentially dangerous situation, he soon switches his focus to Vivian; this is the result of early screenings of the film for troops overseas, who wanted to see Lauren Bacall's role expanded after the success of her pairing with Bogart in To Have And Have Not. I haven't seen the earlier version, but I thought that Vivian was the more interesting sister and I was glad when the narrative shifted towards her shady dealings instead of Carmen's drunken mix-ups. Still, both sisters' troubles are a lot to pack into one movie.

The violence in this film is very overt and hands-on, targeted at the many men who were readjusting to life after combat. Marlowe gives Carmen a couple of hard slaps to get her to come to when he discovers her in Geiger's house with his newly-dead body, and he himself is beaten bloody more than once, not to mention multiple murders that occur as Marlowe attempts to solve the riddle of Geiger's slaying. Additionally, Marlowe is presented as someone that other men would want to be; women throw themselves at him throughout the film, with the exception of Vivian, who eventually admits her attraction to him. It seems there is no woman that Marlowe couldn't have, but Vivian still holds her own as a classic femme fatale. Courting both male and female audiences was a daunting task at this time, but by cultivating strong women and men of action in his characters, Howard Hawks walked the tightrope well.
Posted by Caitlin at 3/06/2010 10:21:00 PM