Suicide seems to have been a common theme in French comedies, or at least the ones showcased in Cannes Classics this year. Jean Renoir's Boudu Sauvé des Eaux is about a homeless man, Boudu, saved from drowning himself by the middle-class bookseller Monsieur Lestingois. Hailed as a hero by the community, Lestingois takes Boudu in and tries to give him a respectable life. However, Boudu isn't interested in the so-called good life. He takes everything Lestingois is willing to give him, up to and including the bookseller's own mistress; after marrying her, he realizes that he was happier as a bum than a bourgeois, and jumps back into the river to reclaim his old life. 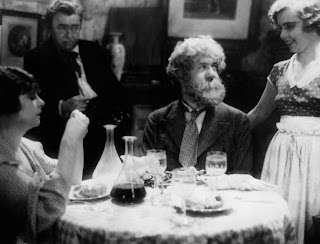 Much of the film's humor comes from the disparities between the Lestingois family's genteel lifestyle and Boudu's crude existence. Although Lestingois holds a higher place in society, Boudu continually bests him, running the man and his family ragged simply because they won't stand up to him -- it would be poor manners, after all, to refuse their guest. The lowly Boudu, therefore, comes off as smarter and wittier than his well-educated hosts, ironic because they run and live in a bookstore, which theoretically should be a fountain of wisdom.

However, this film is more than just another story of a poor man outsmarting a richer one. The characters are all complex and engaging; Lestingois does the right thing by taking in Boudu, but he does so at least partially because it makes him look good -- he's more concerned with society's opinion than with his family's. Boudu takes advantage of his hosts, but he too is shown to have at least something resembling a heart. This lighthearted film bypasses the preachy route by poking fun at both classes simultaneously, with the natural interactions between characters.
Posted by Caitlin at 5/21/2010 11:09:00 AM No comments:

Cannes Classics brought a restored print of Au Petit Bonheur back to the big screen last week. This absolutely hysterical French comedy from 1946 features Danielle Darrieux as Martine, the crazy and jealous wife in a marriage of convenience who sets out to make her husband fall in love with her, collateral damage be damned.

Said collateral damage consists of playwright Alain Plessis, whose car she first shoots and then repeatedly comandeers. Plessis is on his way to a remote inn, a wonderfully creepy place that serves to isolate the main cast, which is where he fell in love with an actress who later left him. He plans to relive their first happy moments, then kill himself; his plan is postponed when he comes across the innkeeper, Brigitte, who is rehearsing her own suicide. Together, they happen upon Martine's husband, Denis, who had broken in to get away from her. When Martine discovers him and he leaves her, she too decides to take her own life. Yes, kids, this is a comedy.

The rest of the film involves Martine and Denis scheming with other people to get each other back. Martine, who started out as mentally unstable, gains the upper hand by overhearing a conversation between Denis and Plessis. However, she is thwarted by an accidental dose of sleeping pills. All three characters are literally on the precipice before Plessins realizes he doesn't want to die, and Martine and Denis realize that neither of them wants a divorce. Along the way, there are more than enough misunderstandings and plays on words to keep this comedy from becoming too dark, and everything is tied up neatly in the end -- literally, with the rope that Brigitte would have used to hang herself.
Posted by Caitlin at 5/19/2010 05:44:00 AM No comments:

You ain't supposed to enjoy yourself 'til sundown...

Early in the festival I had the amazing opportunity to see a newly-restored print of From Here to Eternity projected onto a giant screen on the beach. This was my first time seeing the film, believe it or not, so obviously I jumped at the chance.

The movie itself definitely lived up to the hype. I thought it was interesting to see a film from 1953 set around Pearl Harbor, because it presented a critical view of the military that certainly would not have gotten past the censors had the war still been going on. For example, Warden routinely manipulates and makes a fool of his superior, Holmes; officers would never have been looked down upon like that in a wartime flick. I also thought that the film had a mood of inevitability in the scenes leading up to the attack that might possibly have mirrored the general mood of the public in the 1950s -- that is, the idea that war would break out at any moment. I saw this parallel particularly strongly when Warden and Karen were in the car discussing their future, and he told her, "We're sure to be into a war by then."

The role of the two women in this film is also very interesting. It definitely showcases post-war attitudes about a woman's place being in the home; Karen defines waste as "a house without a child," and her back story revolves around being unable to have children, as though that's what determines her sense of self-worth. Alma, who goes by Lorene, has a job of her own, but it's not considered respectable; she dreams of marrying rich. The goals of both women are completely dependent on men. For this reason, I thought it was fascinating that the film closes on them rather than on the soldiers.

Unfortunately, the screening wasn't as picture-perfect as it sounded in theory. There was another beach-side event on a pier close by, and the music from that drowned out much of the beautifully restored soundtrack for parts of the movie, including the iconic scene of Burt Lancaster and Deborah Kerr rolling in the surf. Fireworks in the ocean, though pretty, were also a distraction. Still, seeing the film at all was a wonderful way to start the festival; I just wish the exhibition had done it justice.
Posted by Caitlin at 5/17/2010 02:42:00 PM 2 comments: