I feel a little bit redundant, writing out a blog entry on Casablanca. Of all the gin joints movies in all the towns in all the world, I feel like nearly everyone, even non-classic film fans, has seen this one. What can there possibly be left to say about it?

As it turns out, quite a lot. Watching it in class this semester was far from my first time seeing the film, but it was my first time thinking about it in the context of wartime Hollywood. This movie, in many ways, is a product of World War II.

In 1942, when Casablanca was made, Hollywood was feeling the effects of wartime rationing just as acutely as the rest of the country. Electricity was in particularly short supply. As blackouts and brownouts rolled throughout the region, directors had to be exceptionally creative. The tight restrictions on lighting resulted in the innovative use of darkness and shadows seen throughout the film. An example from early in the movie is when Rick takes money from the safe; he is off screen, and all the audience sees is his shadow on the wall reflecting the action. What light they did have available is used very carefully; for instance, it is often reflected in Ingrid Bergman's eyes, making them shine to play up her character as the vivacious beauty for whom both Rick and Victor Lazlo would sacrifice their freedom. 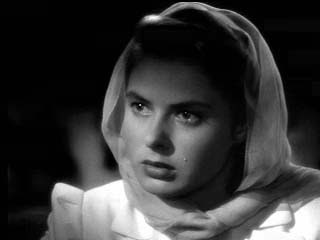 For all the material restrictions that came during the second World War, many existing creative restrictions began to ease. This was in large part due to the creation of the Office Of War Information, which strictly regulated any films that depicted either the homefront or the warfront. In conflicts between the Hays Office and the OWI, the OWI always won. Many previously censorable details -- Renaud accepts sexual favors in exchange for visas, there is rampant corruption among officials, Rick and Sam have an interracial friendship, and Rick and Ilsa admit to an affair, to name a few -- got by the Production Code because they served the war effort, which was seen as the greater good. The character of Rick himself can even be seen as allegorical to the U.S. involvement in the war, going from isolationism to interventionism once the stakes are high enough.

Although Casablanca is best remembered as a simple but well-crafted love story between three people, I find it even more compelling when looked at through the lens of history. The story of how the picture we all know and love came into existence is almost as interesting as the movie itself.
Posted by Caitlin at 11/17/2009 06:12:00 PM